Whether you agree with the polarising design or not, Apple’s AirPods became an overnight phenomenon back in 2017. Since then those in-ear wireless buds have gone on to become the number one sellers in the world – and you only have to head to any city street to see how many people are wearing a pair.

Following the launch of a tweaked second-gen AirPods earlier in 2019, Apple has deemed the headphone popular enough to expand the range with the AirPods Pro. But this isn’t just about offering tweaks; no, it’s a completely redesigned experience, adding active noise-cancellation (ANC) and more.

But in doing so, has the AirPods Pro lost that pocketable design and easy-to-use experience? We’ve been using a pair for all our audio needs over the past month to find out. 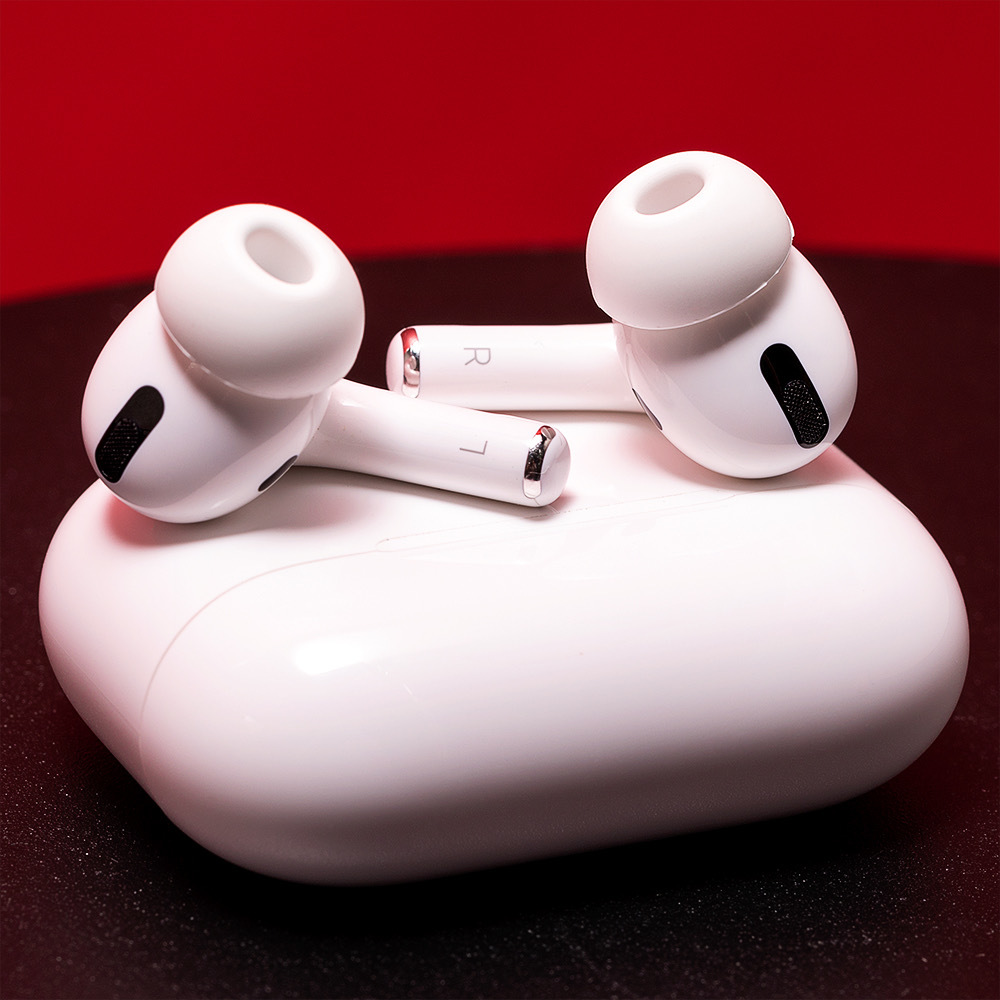 There are two elements to the AirPods Pro that you need to worry about: in the ear and in the pocket.

The carry case, which doubles as the charging case, is shorter in height but wider in design than the one you’ll find with the original AirPods. It’s still very much just as pocketable and comes in a gloss white finish. It’s also included as standard.

The AirPods Pro headphones slot into the case and instantly start charging. Charging can be done via a Lightning cable or by putting the case on a wireless charging pad.

The Pro design is considerably different to the AirPods. The most noticeable difference is the inclusion of silicone tips to improve the fit or ‘seal’, while the thin rod that hangs out of your ear isn’t especially long. This short length will certainly appeal to those who thought the originals’ design just looked odd.

Connecting the AirPods Pro for the first time is incredibly simple. You simply open the case near your iPhone (running iOS 13.2) and press ‘connect’ on the screen. It’s as simple as that thanks to the use of Apple H1 chip – as also found in the AirPods and Beats Powerbeats Pro.

Unlike AirPods, the Pro requires a secondary step, which involves running an Ear Tip Fit Test. Using both the internal and external microphones within the headphones, iOS 13.2 analyses the sound and tweaks its profile to sound better for you.

The process, which involves playing some music, takes about five seconds. It’s during this time that it will determine whether you’ve got a good fit, and if not recommend you change the silicone tip to another size – there is a small, medium, and large options included. For us the medium worked perfectly and we were up and running with a minute.

The silicone tips feel a little tight in the ear – more so than the standard AirPods, but not that they’re uncomfortable – so Apple has included air vents to try and reduce potential pressure and isolation build up. It calls this a “vent system for pressure equalization”, and in all the time we’ve been wearing them they’ve been fine. It doesn’t hurt wearing them for a long period of time, and concerns over whether or not they would be as easy to put in and out as the standard AirPods, are unfounded.

The big new features of the AirPod Pro is ANC, or active noise-cancelling technology. This uses the in-built microphones to check the ambient noise around you over 200 times a second and react accordingly, dumbing down external sound. This is the same process as other noise-cancelling headphones, designed to negate wind tear and other real-time sounds around you as best as possible.

You can also dial-down the feature if you want to hear more around you – a feature called Transparency – which allows you to hear people talking, given the frequency cut-off. This is all controlled via a squeeze of the AirPods Pro, via your iPhone volume control settings, or using the Apple Watch.

We’ve used them on the London Underground, the train, by the sea side and on a plane, and in all cases the Pro earbuds cut out the majority of the noise. Classical music fans will no doubt love the Pros.

Switching between the two modes with that squeeze will take a little getting used to, as there’s a specific indented area where you need to squeeze. Precision is key; as is speed: do it too quickly and you’ll stop the track. It’s yet another new control mechanism that you’ve got to learn.

Another interesting side effect is wearing the AirPods Pro while talking. Because of the microphones both internally and externally that are trying to cancel the noise, your own voice is amplified when in Transparency mode. The best way to describe it is akin to speaking into a microphone while wearing headphones to hear yourself. You don’t get that experience when you’re on a call with ANC on, although the silence is somewhat alien if you’re used to hearing lots of noise around you all the time when on a call, and if the environment you are in is loud, we’ve found your voice is cancelled out, according to the person at the other end. Our advice is not to use ANC when talking to people on the phone.

Music sounds better with you

We’ve tested the new AirPods Pro with a range of music, from dance tracks from Ministry of Sound, to the Interstellar soundtrack by Hans Zimmer, and everything inbetween from Pink Floyd to Billie Eilish.

What is clear is that the AirPods Pro are considerably better than the standard AirPods. The originals focus on ease of use rather than amazing sound quality, whereas the AirPods Pro address that latter point.

Sure, the Pro doesn’t come as bass-focused as the PowerBeats Pro, for example, but still certainly delivers a decent sound for what they are. For many they will be more than good enough for commuting and running, especially once you factor in the ANC performance.

Ideaclanorg - February 22, 2021 0
The Alienware m17 R2 is the larger-screened alternative to one of our favourite gaming laptops. Like the Alienware m15, this 17-inch laptop is built...

Get Your Domain through Wix

There is no denying the fact that mouse is the most important device of the PC gaming arsenal. The modern era is of wireless gaming mice. This latest networking technology has become extremely popular. ...
Read more
Electronics

The Google Chromebook is an interesting experience and proposition. For your money you get a browser-based operating system that is easy to use, but limited by the fact that you need to...
Read more
Electronics

Samsung's main focus may be on 8K tellies these days, but given the current lack of content at that resolution, many are just more interested in a 4K alternative. The Q95T represents the top...
Read more
© All Rights Reserved by Pocket Adjust