DreamHost hosts over 1.5 million sites and is nearly 25 years old.

DreamHost’s main shared hosting plan comes with popular apps like WordPress, website builder options including their own and others like Wix or Weebly. These plans have unlimited bandwidth and disk space. And you get a full 97-day money-back guarantee to test the service out.

DreamHost has above-average speed and uptime with lots of “unlimited” features.

DreamHost’s 648ms average loading time over the past 24 months has been good. It puts them in the upper half of hosts we’ve tested, but well below the top five who have literally cut this average in half (between ~317-405 ms).

DreamHost’s 24-month average uptime is also above average at 99.94%.That’s a pretty good result, but it’s not even the best part.DreamHost has an uptime guarantee. Like other hosts, if your monthly average falls beneath that threshold, you’ll get a credit for the cost of the service. 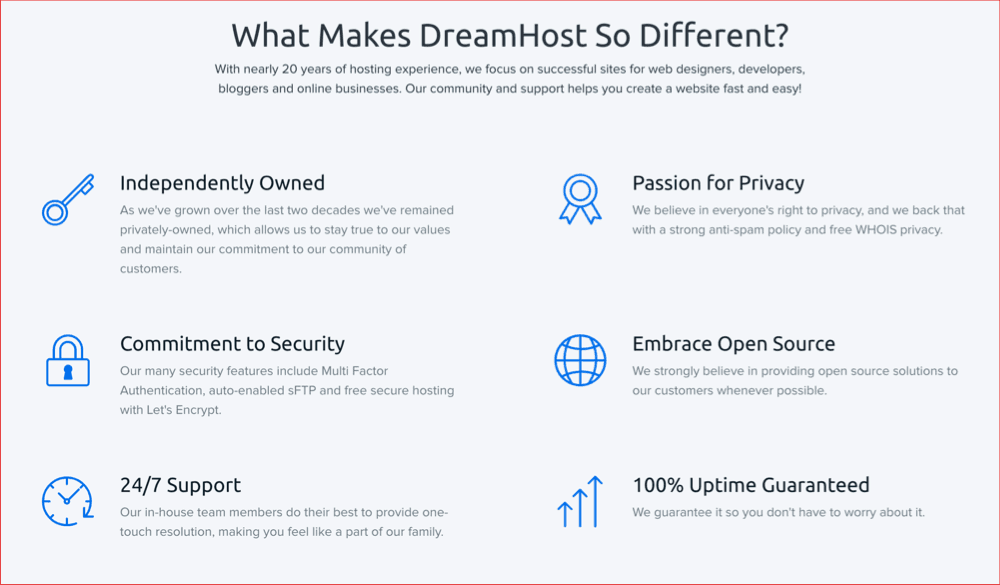 Most uptime guarantees we’ve seen might hover around the 99.98% mark. So these hosts believe and stand behind their services, but they’re also giving themselves a little wiggle room in case normal fluctuations hit.

DreamHost lists a lot of “unlimited” features on their pricing and plans, including disk space and bandwidth.This means you don’t have to worry about disk storage or network transfer when your site gets popular.There are a few caveats to this policy, but it’s mostly legit.

Almost everything from DreamHost is above average. That includes their uptime and page speed, as well as the default features on all of their shared plans.

DreamHost doesn’t offer cPanel access to customers. They’ve created their own panel to help you find all the features.Most inexperienced site owners or bloggers probably won’t care about this fact.But advanced users might for another reason.

DreamHost doesn’t provide an automated way to import .tar.gz files (the backup option for migrating sites out of cPanel).So you’re going to have to manually migrate all of your files through FTP and MySQL.

DreamHost does not offer any free site migrations on their shared hosting plans.Instead, they’ll charge you a $99 one-time fee to move each site. This can really add up if you’re trying to move several clients or company accounts at the same time.There are a few other limitations around how their paid migration services work.

Multisite WordPress sites cannot be moved. WordPress.com transfers will only grab content inside posts or pages. So you’ll have to reinstall and set up your theme and plugins.Any website builder sites, on Wix, Weebly, or SquareSpace, cannot be moved, either.They do offer some documentation to manually move your site. But that’s still not very satisfactory when most other services will do all of the heavy lifting for you.

DreamHost’s performance is pretty good across the board, from reliable uptime to quick loading times.Their default plan limits are pretty high, offering a bunch of “unlimited” options for disk space, bandwidth, and more.

We also really liked that there’s no price increase when your hosting plan renews.On the downside, the customer support was pretty limited to only a few certain hours throughout the week. And the paid migrations can really add up, especially when there’s no cPanel offered to automatically move sites yourself.

Elegant Theme- Divi is For Everyone

Sam George - July 1, 2020 0
Freelancers Divi makes building websites for your clients so much easier, faster and more enjoyable. With Divi, you...

10 popular bathrobes people are obsessed with

Ideaclanorg - January 6, 2022 0
There are so many amazingly plush, cozy, welcoming bathrobes out there today—seriously, I’m not sure how you could choose just one! These bathrobes are...

No one comes this far just to come this far. If you have the passion to take your idea to the next level, let’s do it. Whether it’s creating an email marketing...
Read more
Tech

Wavee is an elegant, creative and modern portfolio theme for individuals and agencies alike. It is built upon some very attractive, bold, creative, modern and unique design. The User Experience is robust...
Read more
© All Rights Reserved by Pocket Adjust